Episode 17 of 20 of the WSOP 2008 ME coverage on ESPN illustrates the power of the ego.

Tiffany Michelle is the most glaring example.  Suddenly, after a few good days, and a few two outters, she’s the best poker player on the planet.  Saying stuff like “keep that up, buddy.” after being semi bluffed on turn and folding the best hand which was K hi.  One of the highlights had to have been when she calls the clock on a 12MM pot, when she is sitting there with 50bb’s, oh yeah…and not even in the f.cking hand. Craig Marquis was right to call her out.  Sure she has the ability to call the clock, but really…keep your dumb trap shut while you aren’t involved in the spot.  The players involved in the pot weren’t stalling…they were thinking. 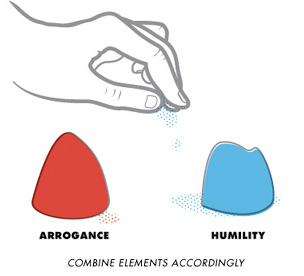 I understand the pressure these players are under going deep in the biggest tournament in the world, but because you luck boxed your way there you are suddenly ‘fooled by randomness’ and think your the best thing since sliced bread.  Newsflash: THE WORLD DOES NOT REVOLVE AROUND HOT CHIPS MICHELLE.

Nam Le is probably one of the best poker players in the world.  One of the things that makes him so dangerous is that he is not afraid to play a short stack.  He has said on several occasions that he tries to enter every day without an ego.  He can make big lay downs because he’s not worried about his ‘image’, he’s concerned with survival, and preserving chips.  Someone playing on pure ego has a greater tendancy to think ‘he’s bluffing me’ or ‘too much money in pot, I have to call.’ – this logic can be a disaster during a tournament, unless you can run hot and steam roll.

Whether it’s ego, arrogance, or naivete all these traits lend themselves to having too much gamble in marginal spots.  Craig Marquis made an insane all in shove, 10 handed, on the November 9 bubble – perhaps the biggest bubble in history with AQ from sb?  vs a standard open and flat call against two players who have him covered and no real reason to be playing garbage hands.  I don’t think this was ego, it was more likely lack of experience, impatience, and being naive to what making the 9 really means.  Dean Hambrick who was the victim of this play with QQ falling to runner runner four flush, lost half his stack on the play.  Now, another spot where it was either inexperience, tilt, or being naive – he dusts all his chips off shipping allin with AJo with lots of players behind.  He can fold, raise/fold, limp – but shoving guarantees you will get called by nothing less than a flip, most likely dominated.

Next time you are playing and start feeling like you’re the man because you got some chips in front of you try to check your ego, preserve your chips, and see how things work out for you, let the game come to you.

Tournament poker is sick.  Variance is incredible.  Often late in tourneys players with some major leaks (ego, cocky, naive, or inexperience) leads to highly questionable plays, flipping at every opportunity, becoming overly aggressive raising marginal A/x type hands from early position, etc.  Because of these tendancies you make plays that a ‘wiser’ player might avoid because they are just too marginal…sometimes these plays work out, and you can steam roll your way to the final table or through it (a la jerry yang) so I’m a little conflicted in saying these characteristics are always bad.

I guess it is more about being confident, rather than cocky.  There is a clear distinction in life and in poker in someone who is confident vs. cocky.  You are not entitled to your chips, you are not owed anything, your superior skill does not mandate you win this next hand, or the tournament.

Play it cool.  Keep your confidence to yourself.  And ask yourself “What would Nam do?”

It would have been an interesting story to see a reasonably attractive girl make the final nine.  Especially in light of the final table delay, in which Harrah’s/ESPN are bound to create a reality show story build up of the event.  She’d be a little easier on the eyes than say….Dennis Phillips.

Interestingly enough, her ego and some poker karma seems to be at work in her eventual demise.  For those of you who don’t know.  Tiffany Michelle is/was a poker journalist for Pokernews.  A great site, run by the infamous Tony G.  Well, Tony is a good guy, and put a bunch of folks in the Main Event to help them out, and publicize his site at the same time.  Tiffany was one of those people.  She was to play for 33%, on a complete freeroll, in exchange for promoting Pokernews.  Oddly, most pictures you see of her have her littered with Ultimate Bet patches.  She was rocking one Pokernews patch…

To be fair, as accustom in the WSOP – the patches/deals grow proportionally to how deep you are in the event.  In addition, Tiffany isn’t the first one to either add to their sponor list, or jump ship all together. This is a shady process that goes down when you make deals on napkins and throw money at broke poker players.  It makes sense from a supply and demand perspective, because there is less real estate, and more guaranteed coverage of individual players. It’s worth noting she does get a little extra attention on this issue because she is a voice (online video hostess) in the poker industry, and a female in a sea of males.

However, where the ego/karma bit comes in for her is in communicating with her sponsor.  First off, it is only fair you give your main sponsor a call/text/email to inform them of your intentions.  A well connected guy like Tony G could in fact help you along on your mission to acquire sponsorship dollars (most likely from his own main site sponsor, Poker Stars).  But do you do that?   Na.  Just slap a few shady ass Ultimate Bet patches on like you’re a slave to collusion, cheating, super users, and Russ ‘I’d steal money from my own mother’ Hamiliton.

Fuck that.  If I was Tony G, I’d pimp slap you across the face for being a shady, money/fame hungry, female dog.  Now, she did have a Pokernews patch on at all times, and when interviewed on Pokernews she covered up one of her UB patches on her chest…but come on.  Show respect for the people that put you in the position in the first place.  It seems we can be quick to forget where we were before we got into the limelight and started playing for $9M.

This little incident reminds me of the Poker Bowl last year – a team event, where Will was playing on the Bluff Magazine Team alongside Paul Wasicka and others.  They had team jersey’s (Oakland) but Will was going to wear a PROP patch to support the brand.  The fine folks at Bluff informed him that wasn’t possible as they were all going to wear Bluff patches….Will reluctantly agreed.  Paul Wasicka, well he didn’t cuz he’s got an exclusive deal with Full Tilt, so he was permitted to wear a different patch.  Lesson learned – big companies in the industry can do whatever they want.  Small ones – f.ck you.

Whatever, either way.  I’m sure Tiffany is a nice enough person, but I have never met her so it’s just a guess.  It was probably poor judgement, caught up in the moment type stuff.  She was playing for $9M.  And that kind of money can make anyone do silly things.  Minor beat for Pokernews.  A win for a shady cheating bastard site, Ultimate Bet.

Final Thought: Why the hell would you promote UB unless you have to like Phil Hellmuth??